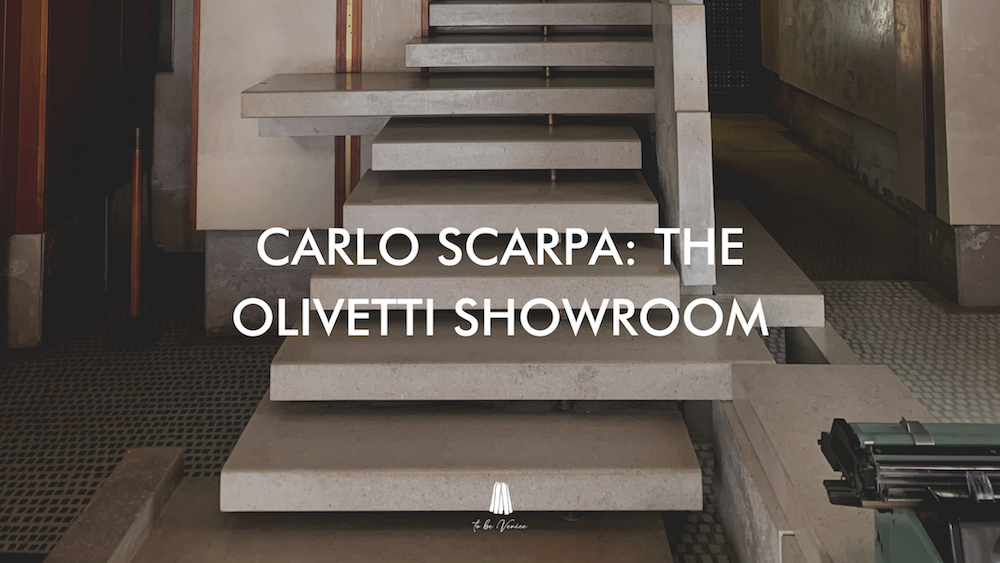 Your first thoughts about Venice are surely of Piazza San Marco, gondolas and beautiful palaces. But have you ever heard of the legendary Venetian architect Carlo Scarpa? If not, it’s time to catch up and read the article!

Who was Carlo Scarpa?

Carlo Scarpa may just be among some of the most underappreciated architects of the 20th century. His work is strongly inspired by history, materials, inventions and landscape, as well as both the Japanese and Venetian culture.

Carlo Scarpa was born in 1906 in Venice. He studied at the Academy of Fine Arts in Venice and began collaborating with craftsmen and glassmakers in the Murano Island. In 1926 he obtained the qualification in Architectural Design and began collaborating with Guido Cirilli at the Istituto Universitario di Architettura di Venezia (IUAV) as a teaching assistant. In the following years, his career proceeded on a double layer: the creation of furniture and domestic interiors and the collaboration with the glass factory of Paolo Venini, of which he became the artistic director.

Scarpa was invited to create a number of works for the 26th Venice Biennale, back in 1951, including ticket booth, which is still standing at the entrance to the Giardini di Castello, though it no longer dispenses tickets.

In 1950–2, Scarpa was also commissioned to make changes to the main, and largest, Biennale building, the Italian pavilion. He created a new rectangular courtyard within the existing building, and removed some of the previously constructed smaller rooms to create a new transitional space where visitors could relax in the garden-courtyard between exhibits. He removed plaster from the brick walls, creating a cohesive exterior wall for a freestanding canopy structure that provides shelter for those passing between the two entrances.

In the gardens of the Biennale you can see another work by Carlo Scarpa – the Venezuela’s pavilion, which was designed from the start and built under the supervision of Carlo Scarpa.

Walking around Piazza San Marco in Venice, under the arcades, we see Carlo Scarpa’s masterpiece – the Olivetti Showroom. Typically Scarpa, typically Venetian and beautifully Italian in every passionate detail.

Stepping inside, we are greeted by an effortless series of perfectly formed concrete landings that sing together as a central staircase. They provide a link between the two levels, but are more than a purely functional element. Planes of beautifully paved concrete are integrated with delicate transitions as you ascend the landings. As you enter, be sure to pay attention to the floor. Scarpa cleverly combined Japanese inspiration with Venetian tradition, thus the Murano glass elements.

The showroom was designed and completed in 1958. The showroom housed collections of modern Olivetti typewriters and calculators, manufactured in the Italian town of Ivrea. In those years, the minimalist and modern showroom definitely stood out against the backdrop of historic Venice. And today, after closing its doors in 1997 and being reopened by the FAI – Fondo per l’Ambiente Italiano (the National Trust for Italy), it is preserved in all its glory with its vertical planes and chamfered corners.

Thanks to the care of the FAI – Fondo per l’Ambiente Italiano (the National Trust for Italy), annual restoration work is now underway. The date for reopening to visitors is planned for 15 February.